The sculptures began with blocks of ice placed together to form one large block. The artists then began using electric chainsaws to carve out the initial design.

The finishing touches, which make the detail of the sculpture, are done with a variety of hand tools.

The theme for 2012 was "Back to the Stone Age" with the cartoon "Flintstones" being front and center.

The downtown was filled with people watching the group from Aesthetic Ice (same company as 2011) sculpt the ice blocks into Dino, the Flintstone’s car, Bam Bam, Pebbles, and an excavating implement which Fred used in his job. 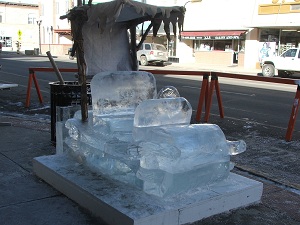 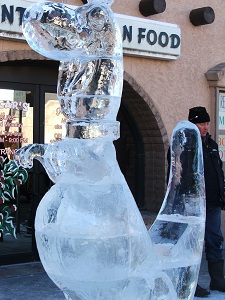 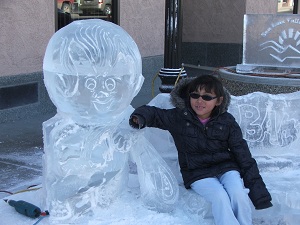 Something new this year was the construction of snowmen using no ice or snow.

This created some very imaginative, creative snowmen. Some were made of Styrofoam decorated with stick arms, small Oreos for eyes, and real carrot noses.

A 5K Fun Run was held beginning at 1:00 p.m. with competition ages ranging from 10 years old and up. The Fun Run began at Cole Park. 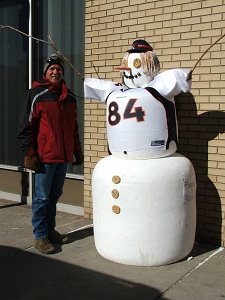 It was a great day to be in Alamosa but if you missed the actual carving the designs will be around until they melt!

Craig Winter is a member of the National Ice Carving Association, The American Culinary Federation, and The Professional Chefs Association. He is the co-owner of Aesthetic Ice Company which is Colorado’s Premier Ice Sculpting Company. He is a chef instructor at the Art Institute developing and directing the advanced pastry degree program at the school. Craig was part of a winning second place team at the International Breckenridge Snow Carving competition.

Executive Chef Robert Meitzier is a former instructor in the College of Culinary Arts at Johnson & Wales University. He is also co-owner of the Aesthetic Ice Company. Robert is a member of the National Ice Carving Association and has competed and medaled in numerous ice competitions including placing second at the International Breckinridge Snow Carving competition.

Michael Pizzuto is a member of the National Ice Carving Association. Michael has had advanced ice training in Tokyo, Japan and numerous international competitions where he has medaled. He is the owner of Creative Ice Sculptures and works with Aesthetic Ice on a continual basis. Michael has also co-authored two ice carving books. 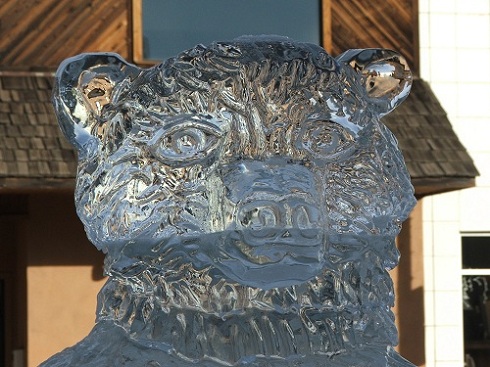