Farming is the lifeblood of the San Luis Valley economy.

With a short growing season the main crops are potatoes, barley, and alfalfa. Smaller areas of lettuce, carrots, canola, and mushrooms are also grown.

There are also many ranches raising beef cattle and sheep. 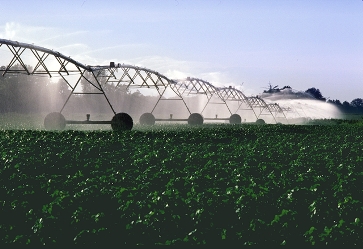 Most of the crop land is irrigated with large center pivot irrigation systems which draw water from the deep underground aquifers.

The soil on the valley floor varies from sandy to rocky as you move from east to west.

On the western side of the San Luis Valley you may notice large piles of rocks in the corners of fields.

This is called potato rock as it is removed from the soil to make farming easier.

Any land that is not farmed or grazed is covered in “chico” which is low brush such as rabbitbrush or greasewood.

It is unclear what the future may bring.

The San Luis Valley has been experiencing droughts for the past several years. With low snowpack in the mountains there is less water for the farmer’s crops.

Water is the life of farming and without water this area could not exist.

It is uncertain what the future will bring in regards to water, farming, and the people that call the Valley home.

Whatever does happen, this area is a beautiful place to live and visit. With so many natural wonders, outdoor trails, and wildlife people will continue to be drawn to the San Luis Valley!!

Return to Top of San Luis Valley Information and Facts